Triphala: Why is it Ayurveda’s most popular herbal?

Triphala: Why is it Ayurveda’s most popular herbal?

Peter Brown: The biggest selling herbal within Maharishi AyurVeda, and probably within Ayurveda as a whole, is called Triphala, which means three fruits. What is the purpose of Triphala? What is it good for?

Dr Donn Brennan: Triphala is, as you say, probably the most common Ayurveda herbal used in the world – considering the population of India and the global reach of Ayurveda. This herbal has so many good properties.

As you say, Triphala consists of three fruits. One fruit is good for Vata, one is good for Pitta and one is good for Kapha. So it has the capacity to balance all three of the doshas [underlying principles that govern our body]. Not only that, it is an excellent herbal to support our digestive system.

Triphala helps the whole of the digestive tract. In particular it has a mild laxative effect, which works by gently encouraging the colon in its actions. Also, it is not habit-forming.

As well as aiding digestion, Triphala acts as a detox – allows the body to clear toxins more efficiently.

Furthermore it is considered a Rasayana, which means a tonic. So Triphala has the amazing capacity to be both a cleansing and at the same time a nourishing herbal.

In Maharishi AyurVeda Triphala, rose petals are added. This brings a much better balance to the whole product.

Triphala has specific properties as well, for example it’s good for the eyes. The addition of rose petal enhances that property. Triphala is also good for the skin and for the urinary tract, so it has many good uses. 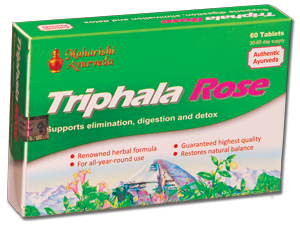 The way it is most often taken is just before bed, as this is useful for elimination. How many tablets to take is variable [between 1-3 for adults], according to every individual’s own eliminative capacity. They can be taken with warm water at bedtime.

There are other uses for example for the eyes, we would resort to Triphala. It’s just an excellent tonic [1 tablet twice daily. Carefully read and follow the directions for use on the label].

I remember one of the great Ashtavaidyas [from one of the few remaining family lineages that are considered the leading authorities on Ayurveda] said that his grandfather, a brilliant Ayurvedic doctor, never took any medicine in his life, never took any Ayurvedic medicine in his life, except one – Triphala. He lived well into his late 90s, never with a health problem and he attributed this to the fact that he took Triphala every day.

Peter Brown: It’s interesting that you say that it is taken every day. It’s usually thought that laxatives are rather weakening to the bowels, so they should be taken in very short bursts when absolutely needed. But Triphala, as you say, is strengthening and at the same time is cleansing.

Dr Donn Brennan: Yes, and that’s an interesting point Peter because when we take it in the evening its really for elimination. What generally happens is we need to use less and less over the months we are using it. What it’s doing is helping the bowel function, so increasingly the bowel is working well, in and of itself. It could be that might then we transfer to using it in the morning, once the bowel function is really good, because then it has more tonic effect.

Triphala consists of three fruits, which work synergistically to detoxify your entire digestive tract. Cabbage Rose is added to support and enhance the other ingredients. Besides helping you detox, Triphala Rose helps in absorbing nutrients effectively and in restoring your health, immunity and energy. BUY 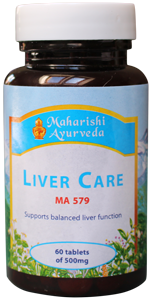 LiverCare helps cleanse the liver and its microchannels to flush out undigested impurities. This clears the path for vital nutrients to reach the liver. It promotes the first step of digestion – breaking down food in the stomach and small intestine. BUY

Digest Plus regulates Agni to balance your appetite and support good digestion. It helps balance stomach acid, reduces gas and supports liver and pancreatic function. It also detoxes ama from your body tissues. This preparation is especially suitable after a heavy meal. BUY

The 17 herbs in Gastro Support work synergistically to help maintain balance in the stomach and digestive tract. The cleansing and balancing actions of this preparation normalise stomach acids, bring back a feeling of digestive comfort and ensure we get the maximum nutrition from our food. BUY

The 17 herbs in Herbal Aci-Balance are soothing and cooling to the stomach. They help nip Pitta imbalances in the bud by keep stomach acidity in balance. BUY

Some internal cleansers only purify the colon and digestive tract. Detox Pitta detoxifies your whole body and helps reduce strong body odour, by supporting the natural purification of the liver and metabolism. BUY