How to make your own Ghee

How to make your own Ghee

Ghee is used in many Indian recipes and is one of the best cooking fats you can find. It does not oxidise when heated, as do most vegetable oils (oxidisation can lead to free-radicals floating round your body – not exactly desirable).

Ghee has marvellous properties and is highly regarded, both as a nutrient and as a preservative for foods and medicines. It is considered, by Ayurveda, to carry the the nutritional components of the food it is cooked with, deep into the body tissues. Ayurveda also considered ghee to be food for the brain and a rejuvenator. Its flavour is quite unique, and it lifts and enhances any dish. 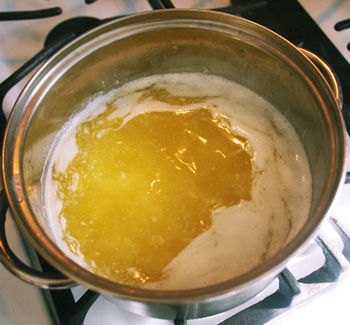 Oil and fats, in general, take quite a bit of digesting and should always be taken in moderation. Ghee is easier to digest than other fats or oils yet, as with other oils and fats, you should still limit the quantity you eat. Just because it is good for you, having more won’t necessarily do you more good. Too much ghee dulls the digestive fire and this can lead to the accumulation of a toxic build-up called Ama. Small amounts of ghee in your diet actually stimulates your digestion.

Ideally, ghee should be eaten within a few weeks of making, though it can keep in a fridge for longer and still taste good. Old ghee is said to have medicinal uses and some ghee is kept for hundreds of years to treat certain conditions, but it would probably taste quite awful.

The residue left after filtering has its own nutritional value, though, since it consists of concentrated milk solids, it can be heavy on the digestion. Traditionally it is given to children to eat, as it is highly nutritious and helps build a young body. It can be used when making bread, cakes, biscuits, or added while cooking vegetables. The ghee residue is actually quite tasty when added to soups or stews, but is does have a heavy quality, so better for a lunchtime meal rather than in the evening.

Sometimes you just don’t have time to make your own ghee, but good quality ghee can be hard to find. Most commercial ghee is non-organic and does not have the Omega-3-rich properties that ghee from grass-fed cows has.

BioAustria organic ghee, from Maharishi Ayurveda Products, is made from organic milk and is processed in the tradition Ayurvedic way to produce the finest ghee available. The milk is supplied by cows that feed on the alpine pastures of Austria.